At this stage in the game, it rarely surprises me when my children (especially #2) do horrible things. I’m not one of those parents who errs on the side of “oh no, not my little angel!” In fact, not only am I surprised when my children don’t do something horrible, but I’m also usually the first to blame them when a horrible thing happens that might not even be their fault. Someone got hit with a stick on the playground? One of mine probably did it. A lifeguard is yelling and blowing his whistle at the pool? #1 is probably removing his swimmies and running as fast as he can to jump into the deep end of the pool and drown. Fire alarm going off in a restaurant? Yep, probably one of mine. (Just kidding, I don’t take these animals to restaurants.) 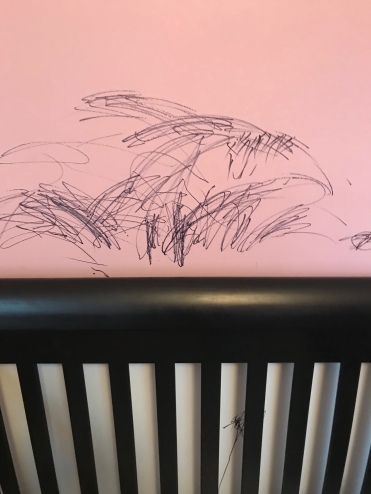 So when my MIL who was babysitting for a few hours during his naptime sent me the above picture of #2’s naptime artistry, I was unsurprised, unfazed, and otherwise unmoved. Want to side note here that I don’t blame MIL one bit. It definitely still would’ve happened if I had been the one at home with spawn of Satan at the time, though probably worse because I don’t look in the monitor nearly as frequently as she does because she’s a more caring person than I.

To answer a few questions: Yes, that’s Sharpie. And, no, we aren’t even in our own house right now. This artwork was created in husband’s grandparents’ house where we’re currently living while our kitchen gets renovated.

I can think of no better way to say “thank you” than:

“Hi thanks for letting us stay in your house for free. #2 left you an original piece of artwork. Media and materials: your wall, his entire body, sheets and pillow, black Sharpie. Enjoy!” 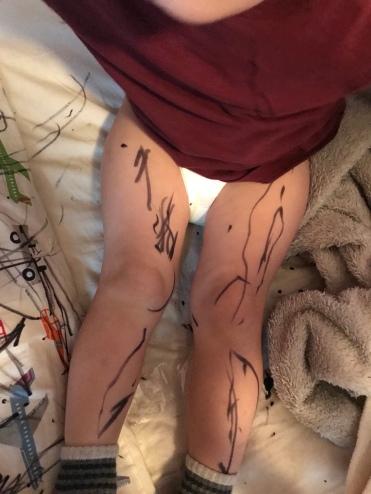 Of course the question becomes how did this 2-year-old get a hold of a black Sharpie? and I’m proud to report after careful investigation that I figured out the answer which is this: he found it days before, tested it out, and then stowed it under his pillow or mattress like a prison shank for use at an unsupervised time.

How did I come to this conclusion? Well days before, I had noticed some black marks on his brand new crib. I figured it came that way from the store (we got it on clearance just to use while we’re staying at this house) and didn’t think about it again. Days after his artistic expression and after the Sharpie had been removed from the house (because nowhere is safe, nowhere is sacred), I noticed additional graffiti tags on the printer which is also in his room. This means he found the Sharpie and did some testing with it days before hiding it in his crib to complete his final masterpiece.

I think my favorite part about the entire ordeal is where he colored on his head. Yes, he colored all over his legs and belly and arms and also his face and that was ridiculous too, but the funniest marks are the ones on his actual HEAD underneath his hair. Every time I brush his hair back to wash it I can see it under there like a tattoo that a prisoner reveals to his fellow inmates after going full skinhead.

In conclusion, everyone please turn your Sharpies in because I’m collecting every single one within a 50 mile radius before my white-on-white-on-white-on-white kitchen is complete and I have to move back into it with my crafty little prisoner.  God help us all.

One thought on “A Rocco original”